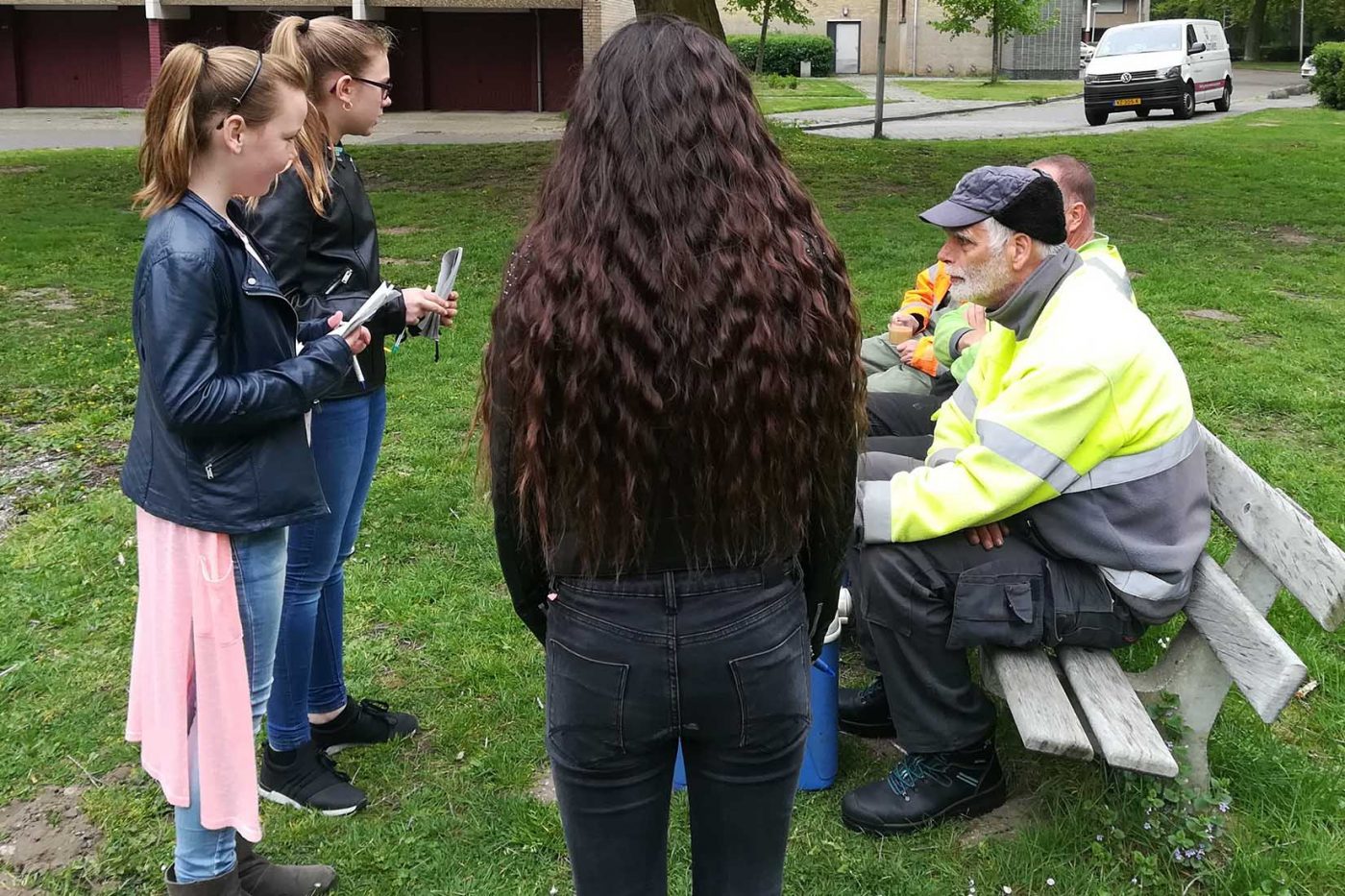 Christoffel School and Fortuna in action for the neighborhood!


Together, children from Christoffel School and students from Fortuna make the neighborhood  a bit more beautiful! In this way they get to know each other’s environment. Stay tuned and check out the project updates! 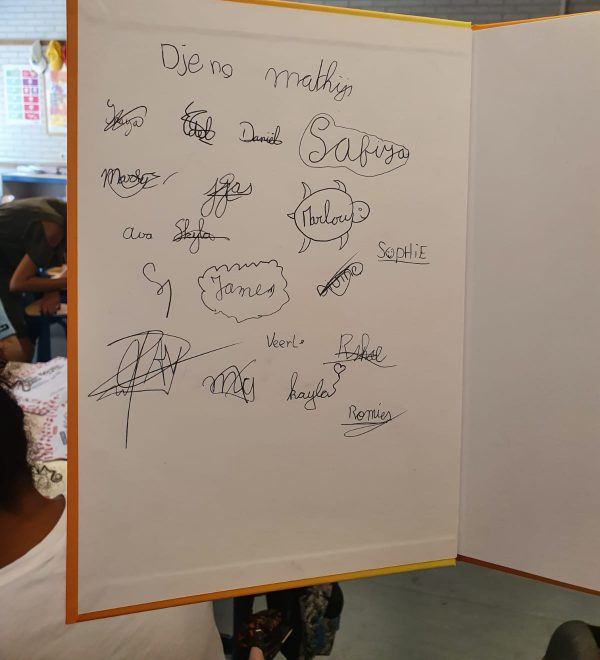 As the students handed out the MOVE certificates to the children at the end, a celebratory air filled the room. The children had virtually built a cookbook from scratch, aimed at promoting the health of the community, in times of great distress at the hand of the coronavirus pandemic. They had displayed resilience and commitment to the project, always eager to engage with the students in developing their project in all the Think & Do sessions.

As such, though it was sad to conclude the project and leave the Basisschool Christoffel, it had truly been a festive ending to a successful project. 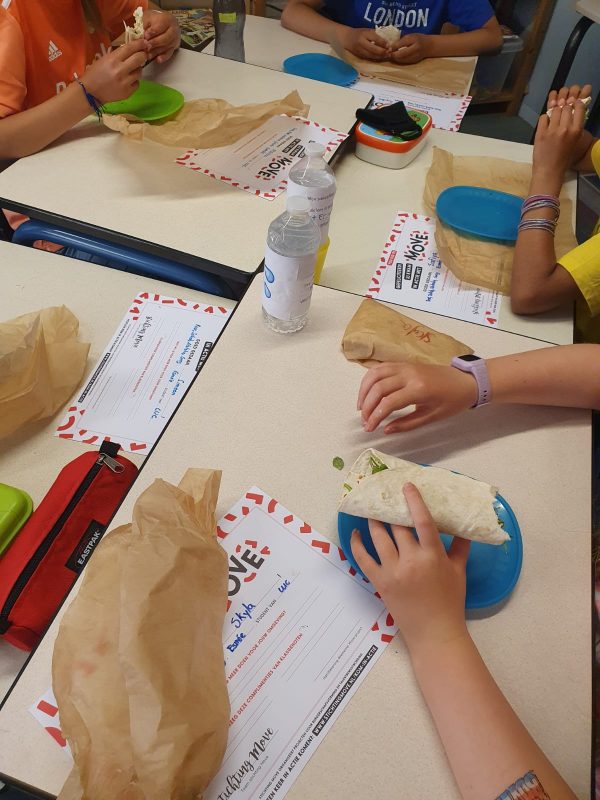 Fittingly, the children were quite excited to see the final result, after having had their last (online) Think & Do session in March, and put their signatures on two copies of the book.

In celebration of the completion of the project, the festive ending consisted of a brief introduction of the website, https://debomvollekeuken.wordpress.com/, which serves as a digital copy of the book, and preparing several variations of the healthy wrap recipes that had been featured in the cookbook.
Split into two groups, one group started with preparing wraps for each child, while the other created promotional posters for their website and cookbook, as well as brainstorming where to distribute some of the cookbook hardcopies. After the groups switched their tasks, and the students cleaned up the cooking space, it was time to enjoy the wraps together.

Though it seemed like the project had been delayed for ages, the children had remained enthusiastic even anticipating a possible return of the MOVE project in the next academic year. 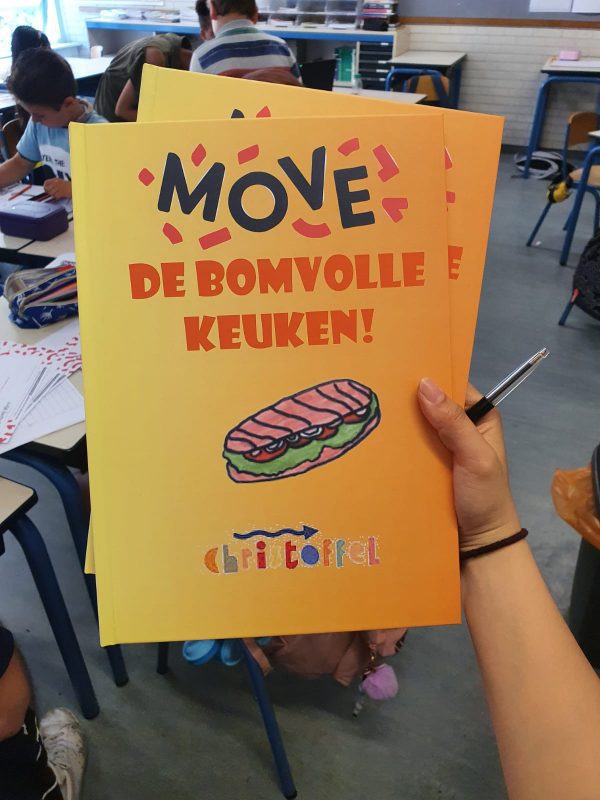 On Monday 14th of June the MOVE project at the Basisschool Christoffel school had its festive ending.
The children of group 7A all received their certificates for their excellent engagement and work on the cookbook (also comprising exercises) under the Sports & Health theme. The project lasted almost 9 months, a much extended time span, due to the coronavirus pandemic and changing regulations.

The cookbook “De Bomvolle Keuken” comprised various breakfasts, lunch and dinner recipes that the children had brainstormed and refined over the span of the project. All the recipes were crafted with a healthy diet in mind. Additionally, the book was illustrated by the children themselves, who crafted drawings of the dishes in their free time.

After a long time following the previous session at the Christoffel School, due to the Christmas break and new coronavirus regulations, we had our first online meeting with the children on Friday, March 26.

The long-awaited outing into student life (now in a video version) was shown to the entire class online, followed by a Q&A round about what our student life at University is like. There was a variety of questions, such as, what our rooms look like and whether we miss our family since we live by ourselves.

We then broke the general meeting up into smaller groups to discuss the recipes we had selected from their recipe ideas which they had sent us over the Christmas break, to be included in the cookbook.

All the kids approved of the recipes for breakfast, lunch and dinner, with a healthy version of pizza (featuring a cauliflower crust being a clear favorite). Many of the children were also eager to offer their ideas on how to make the recipes even more healthy.

We then rejoined the general meeting and discussed the plans for our next meetings. The children were very enthusiastic, particularly about the idea of cooking with us for the festive ending.

So despite the technical difficulties, which naturally arose from switching the interactive sessions to an online environment, the children remained engaged in the discussions and excited for what is to come with the project, as are we! 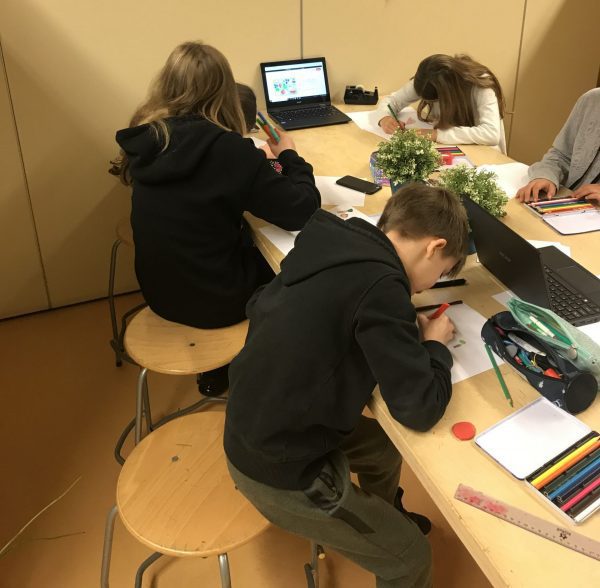 Move The Hague – Getting Started On The Final Project

For the final Think & Do session before the winter break, the children got started on crafting various elements of the final project. Ranging from drawing decorations for the recipes of the cookbook, creating a document in which all the exercises were collected, drafting the letter explaining our project to neighborhood residents, to researching recipes for the meals the children had suggested to be included in the cookbook.
After a brief discussion of the final idea (website, including recipes but also exercises) we conducted the talent quiz, identifying which children to put in which group. We then split up into groups with the children working immediately on their tasks, as they were eager to fulfil their tasks. Some groups finished their task early (such as collecting all the exercises in the document) and then joined the group which was tasked with the decorations for the posters and website.
Besides a few pointers from our behalf, the children worked autonomously and completed all their tasks ahead or on time. The children took matters into their own hands, collaborating with each other to creatively solve problems. Some of the children even performed a number of the exercises to test their validity and challenging nature before concluding whether the exercise was too easy or difficult or just challenging enough to be included in the document.
After approximately an hour of working on the different tasks we gathered again in the classroom, where we talked about the upc 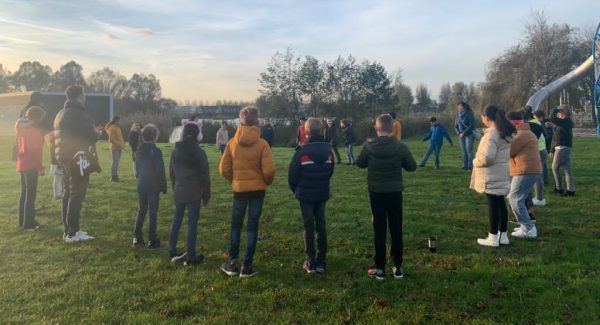 Move The Hague – the Exploration of the neighborhood

On November 13th, we conducted our second Think & Do Session with the children from the De Christoffel School. Though we were not able to interview people in the neighborhood due to the COVID-19 restrictions, we were able to explore the neighborhood and take the kids to a park some 10 minutes away from the school.

After engaging with the children in an interactive game we split up into two groups to discuss the answers they had collected from their parents in regard to what is a healthy lifestyle, particularly during corona, in regards to diet & exercise. Most of the children were keen to share their ideas. Both parents and children were concerned about the reduced amount of physical activity.

Therefore, we started to discuss ways that we could create a project that has a lasting positive impact on their own but also on the lives of the people in the neighborhood. The main two ideas were physical activity, in the form of a parkour, and a cookbook that would be collectively created, and shared with the community. An intense vote in the classroom culminated in a narrow majority sided with the cookbook, causing a mix of excitement and disappointment.

Reflecting on this session in a recent meeting we set out to also include some form of physical exercise in the final project to cater to each of the children’s wishes. Consequently, creating a cookbook that will also address physical exercise and wellness! 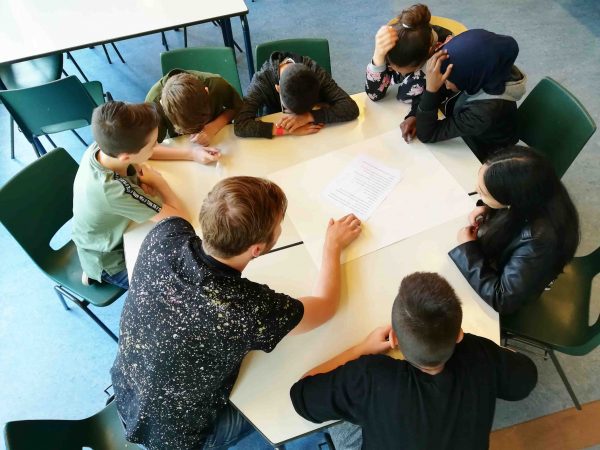 Introductions & Brainstorming for the Exploration of the neighborhood

The first Think & Do Session was largely aimed at the children getting to know us. We played an interactive trivia game with facts about us. The children were greatly engaged in the game, with lively discussions in their groups about which fact belonged to which student, and an uproar of excitement capturing the classroom whenever they attributed the fact to one of us correctly. As a result of the game the children found out Jakob’s (our treasurer) nationality who then quickly became known as Mr. Austria.

Following the game, we split up into groups to brainstorm ideas about the exploration of the neighborhood. The theme chosen by the children was Sports & Health. Across the groups there was convergence on the idea of a sponsored run to raise awareness about the need for physical activity even during a pandemic. The children then discussed what to do with the proceeds of the run, some wanting to donate them to research into the coronavirus, others into social programs to help people affected by the virus, as well as posters to remind people of the neighborhood of the lockdown regulations.

Though we only had just about an hour with the children, we were able to build a connection with them. They got to know us and the project and came up with a variety of great ideas, leaving us with a lot of starting points to help them realize their Move project. 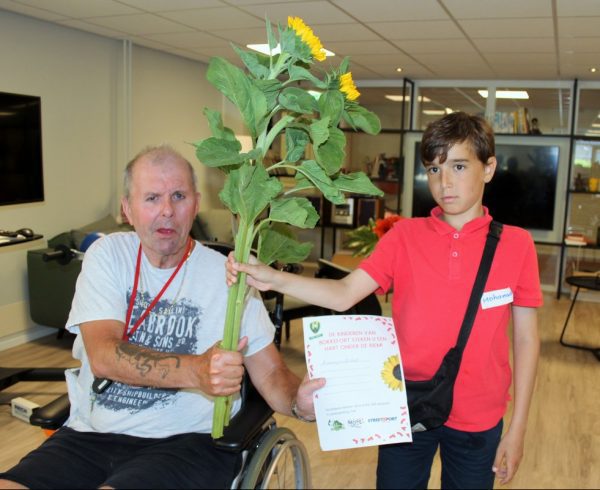 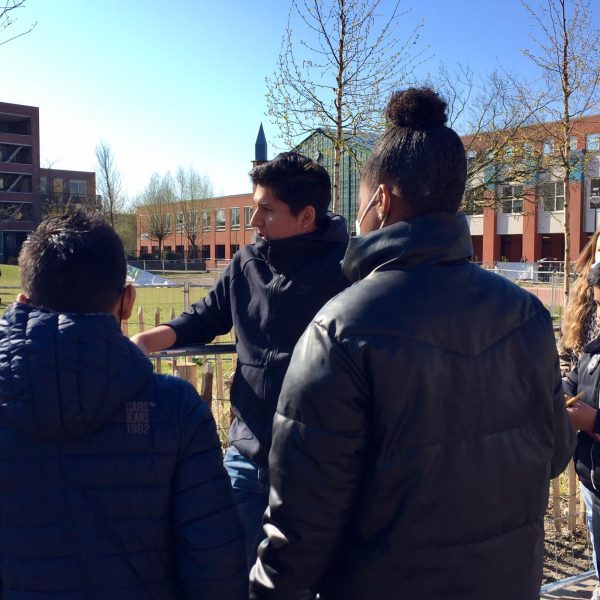 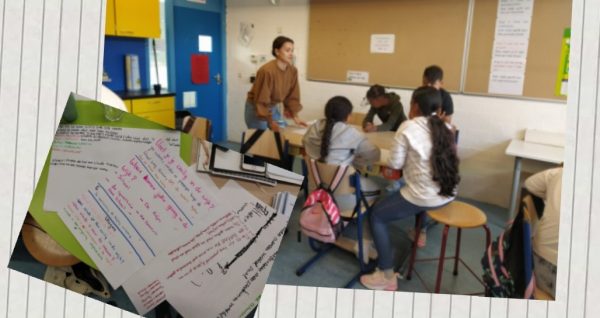 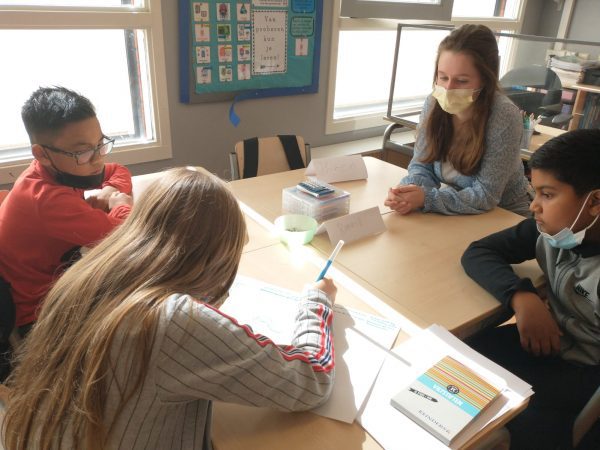 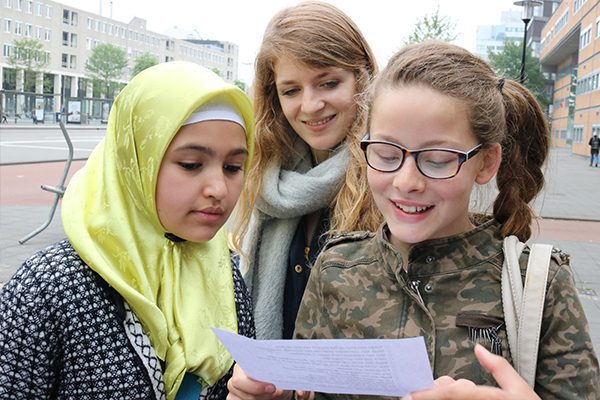 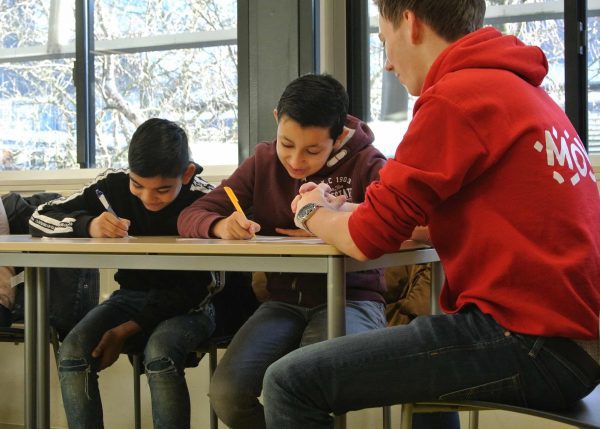 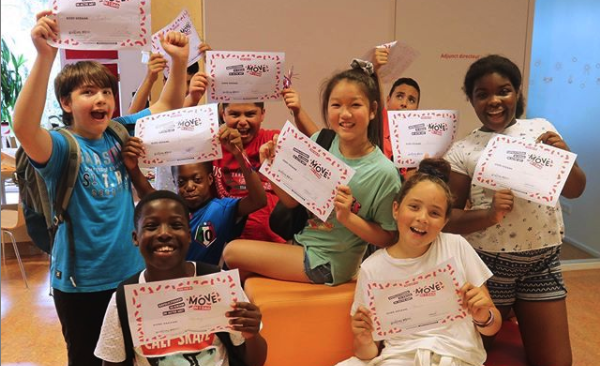 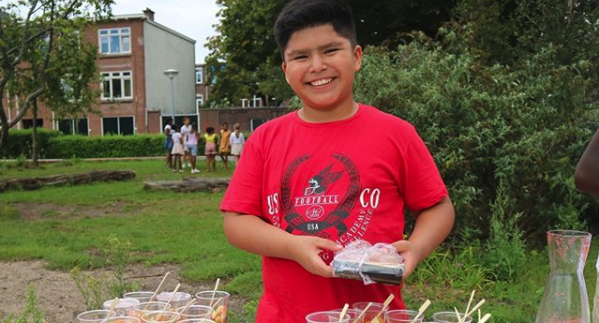